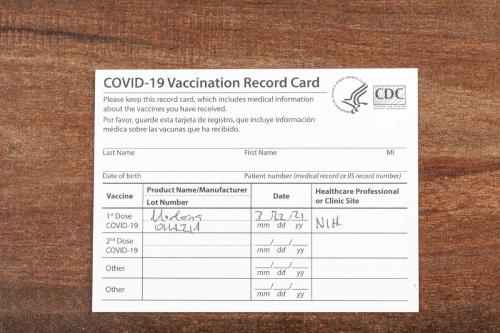 Since President Biden issued Executive Order 14042 (the “Order”), and the Safer Federal Workforce Task Force (the “Task Force”) issued companion Guidance interpreting the Order (our summary of which can be found here), there have been additional developments providing further clarity on the implementation of the required COVID-19 safety protocols for federal contractors.

On September 30, 2021, the Federal Acquisition Regulation (“FAR”) Council issued a Memorandum on Issuance of Agency Deviations to Implement Executive Order 14042.  Since that date, a number of federal agencies have issued class deviations to incorporate required language into their covered contracts.  On October 4, 2021, the Task Force updated its FAQs on Vaccinations.

The much-anticipated FAR Council Memorandum provides federal agencies that award contracts under the FAR with direction for the incorporation of a clause into their solicitations and contracts to implement the requirements of the Order and Task Force Guidance (the “FAR Deviation Clause”).  The memorandum includes the language of the FAR Deviation Clause, which provides, in relevant part:

The FAR Council Memorandum clarifies that the Clause must be included in the following solicitations and contracts for services:

Importantly, the memorandum reiterates the Task Force Guidance’s encouragement that agencies include the COVID-19 safety protocols and the FAR Deviation Clause in contracts and subcontracts not expressly covered by the Order, including contracts that have been or will be awarded prior to November 14 on solicitations issued before October 15; and contracts that are not covered or directly addressed by the Order, because the contract or subcontract falls under the simplified acquisition threshold or is a contract or subcontract for the manufacturing of products.

The FAR Deviation Clause, however, does not apply to contracts with Indian Tribes under the Indian Self-Determination and Education Assistance Act, or solicitations and contracts in which performance is outside the United States or its outlying areas.

The FAR Council directs agencies to act expeditiously to issue deviations so that contracting officers may begin to apply the Clause on or before October 15, 2021.  Pursuant to a September 30, 2021, letter from the Civilian Agency Acquisition Council (the “CAAC Letter”), agencies that adopt the Clause without change will be considered to have consulted with the CAAC Chair, as required by FAR 1.404(a)(1).

These class deviations provide further insight as to how individual agencies will approach the Order and any mass modification program.  The GSA, in particular, provides detailed information in its Class Deviation CD-2021-13 as to the scope, applicability, and implementation of the Order and its corresponding Guidance.  In order to simplify compliance tracking, vendor communication, and customer messaging efforts, the GSA will incorporate the Clause into all new and existing contracts, including contracts solely for products.  The FAR Deviation Clause will be incorporated into GSA contracts through a bilateral modification.

GSA contracting officers are asked to complete as many modifications as possible before November 14, 2021.  The GSA also provides some insight as to potential interim penalties, at least with respect to IDIQ contracts, that are not returned signed by that date.  Contracting officers may temporarily hide contractor information on GSA websites and/or e-tools, or flag contractors that have not accepted the modification.  Such actions could clearly impact potential new or additional business for contractors that have not signed the modification.

For instance, the FAQs address the considerations federal agencies should take into account when determining whether an employee should be entitled to an exception to the vaccination requirement.  The FAQs instruct agencies to consider “factors such as the basis for the claim; the nature of the employee’s job responsibilities; and the reasonably foreseeable effects on the agency’s operations, including protecting other agency employees and the public from COVID-19.”  Employees who are granted an exception “would [generally] need to follow applicable masking, physical distancing, and testing protocols for individuals who are not fully vaccinated, as well as applicable travel guidance.”  But, in certain cases in which the agency determines that no safety protocol other than vaccination would adequately protect coworkers, the agency may deny the requested accommodation.

In cases in which the agency denies an exception, the employee must receive their first (or, if a one-dose series, only) dose within two weeks of the denial, and the second dose (if applicable) within 6 weeks of receiving the first dose.  Employees that refuse vaccination are subject to discipline, up to and including termination of employment. The FAQs recommend the adoption of an enforcement process that includes a brief, five-day period of education and counseling to encourage vaccination, followed by progressive discipline that would include a short suspension of 14 days or less.