Christina Haack cuddles her children after moving out of family home 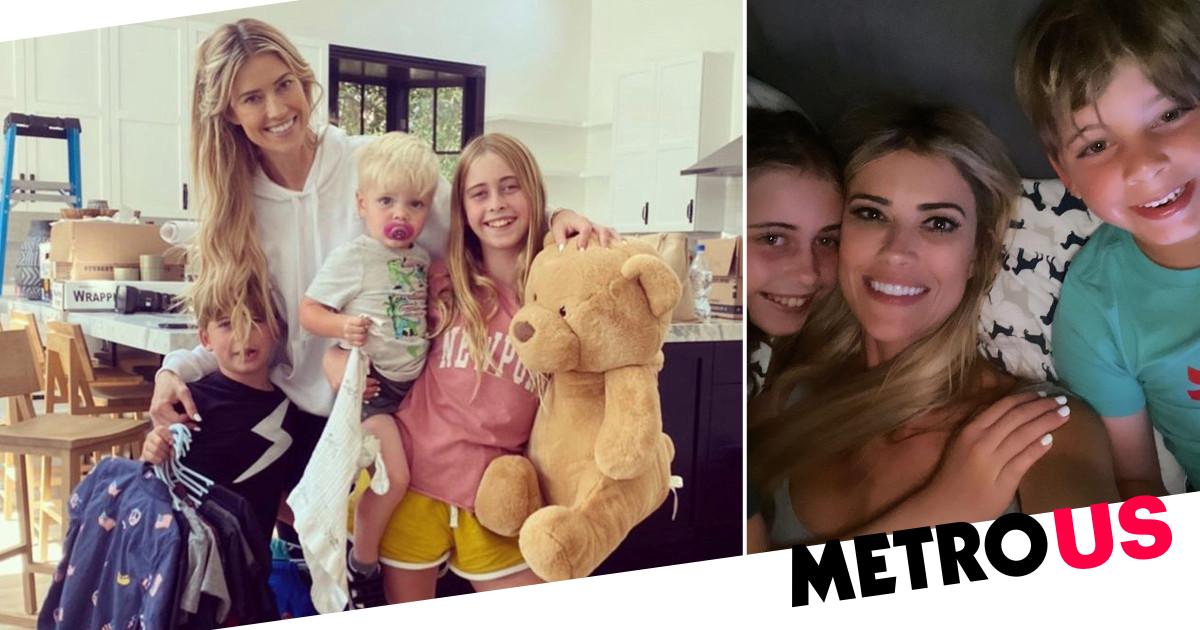 Christina Haack shared a sweet picture of herself snuggling in bed with two of her children as they settled into their new home.

The HGTV star and her brood said goodbye to their former family house in Newport Beach, California over the weekend as she moves on following her split from ex-husband Ant Anstead.

The 39-year-old appeared to be in great spirits after the move as she shared a snap of herself cozied up to daughter Taylor and son Brayden on Instagram Story on Tuesday with the caption: ‘2 out of my 4 fave cuddle buddies’.

Just weeks after her divorce from TV host Anstead was finalized, the Flip or Flop star packed up and moved out from the home – which she closed a sale on last month.

Haack had listed the home for $6 million and it ended up selling for $5.35 million, with the approval of her former spouse.

Posting a snap of herself and all three of her children on Saturday, she gave fans a glimpse into their ‘moving day mayhem’ as the brood could be seen standing in a kitchen filled with boxes.

Anstead and Haack were married for 21 months before they split in 2020, with the couple sharing one-year-old son Hudson.

According to TMZ, the pair have ‘privately settled’ the property and assets accumulated during their marriage.

In 2018, the TV personality divorced ex Tarek El Moussa, with whom she shares daughter Taylor, 10, and five-year-old son Brayden.

Earlier this month, the Christina on the Coast star enjoyed a romantic getaway in Tulum, Mexico with her new man to celebrate her birthday.

‘Thank you to my man for kicking off my 38th with a whimsical dream vacation,’ the California native wrote alongside multiple pictures of the Texas-based realtor.

In an earlier post, Haack explained how the romance began as she stated: ‘I met Josh when I wasn’t in a state of fear or fight-or-flight … I had taken time off social, hired a spiritual coach and smoked a Bufo toad (which basically reset my brain and kicked out years of anxiety in 15 mins).

‘When we met this past spring, the synchronicities hit us so hard and fast they were impossible to ignore. I felt immediately crazy protective over him and wanted to keep him for myself and get to know each other before the tornado (media attention) hit.’

The TV star continued: ‘We’ve had a few solid months of just us getting to know each other and I’ve loved every second of it. So called “fame” provides so many things but it comes with a cost.’

Explaining how Hall was fine with the new media attention he would receive due to the relationship, Haack told fans: ‘We decided whats in the past, is in the past. We aren’t looking at all the nonsense online. The internet and social are great for businesses or staying up to date on fam / friends but also, can be toxic and (let’s be real) pretty fake.

‘I may be a bit crazy and im definitely not perfect but I will never live my life based on other peoples judgments or opinions. We pride ourselves on never judging others and always wanting others to be happy and we wish others would have the same respect.’

She concluded: ‘Josh doesn’t have social media, but I want to thank him for whisking me away on a romantic tropical vacation he planned entirely on his own. ❤️✈️ So yes “another relationship” and guess what. I’m 38 -I’ll do what I want.’